Anchor bolts are used to connect structural and non-structural elements to concrete. The connection can be made by a variety of different components: anchor bolts (also named fasteners), steel plates, or stiffeners. Anchor bolts transfer different types of load: tension forces and shear forces. 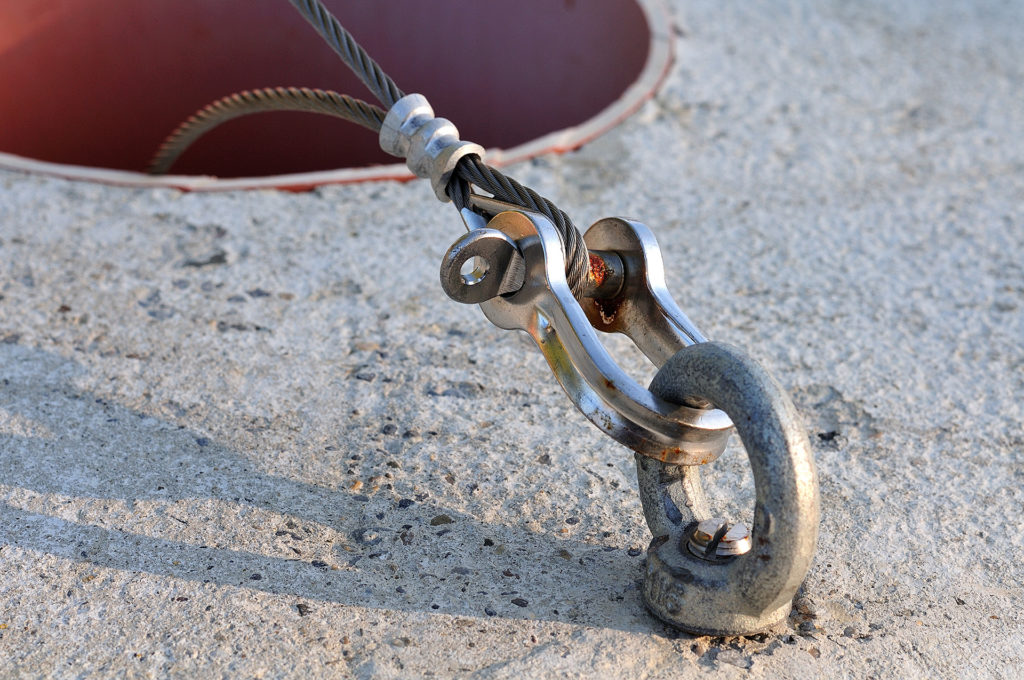 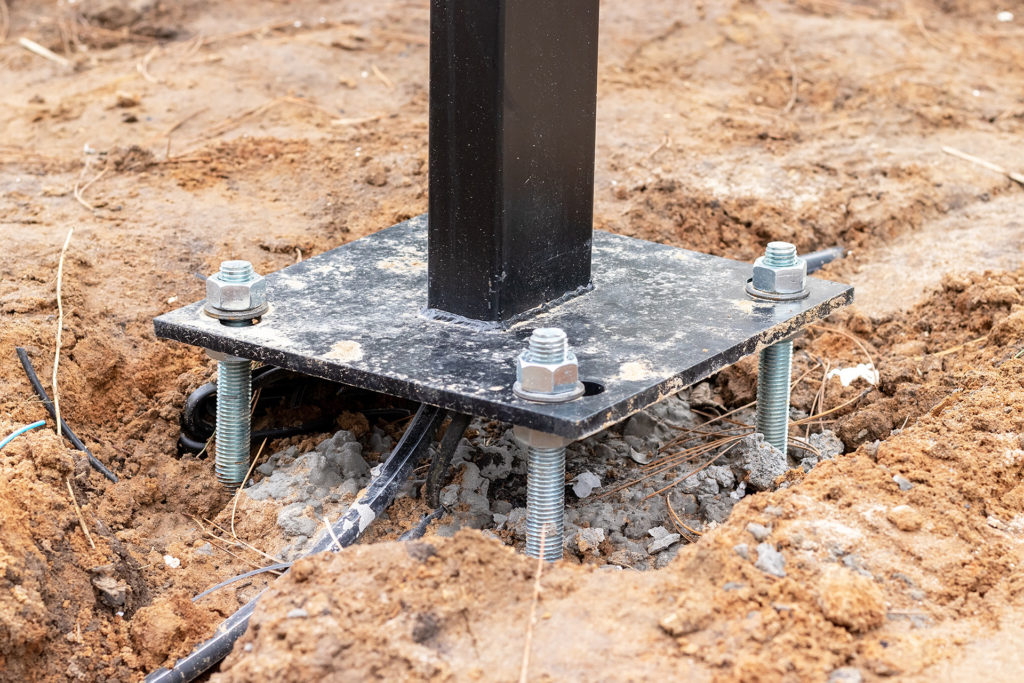 The simplest – and strongest – form of anchor bolt is cast-in-place, with its embedded end consisting of a standard hexagonal head bolt and washer, 90-bend, or some sort of forged or welded flange. The last are used in concrete-steel composite structures as shear connectors. Other uses include anchoring machines to poured concrete floors and buildings to their concrete foundations. Various typically disposable aids, mainly of plastic, are produced to secure and align cast-in-place anchors prior to concrete placement. Moreover, their position must also be coordinated with the reinforcement layout. Different types of cast-in-place anchors might be distinguished.
WB Equipment will test the integrity of your bolts, using sophisticated testing equipment.
Let us know your requirements:

Post-installed anchors can be installed in any position of hardened concrete after a drilling operation. A distinction is made according to their principle of operation.

A wedge anchor
The force-transfer mechanism is based on friction mechanical interlock guaranteed by expansion forces. They can be furtherly divided into two categories:

Undercut anchors
The force-transfer mechanism is based on mechanical interlock. A special drilling operation allows to create a contact surface between the anchor head and the hole’s wall where bearing stresses are exchanged.

Bonded anchors
The force-transfer mechanism is based on bond stresses provided by binding organic materials. Both ribbed bars and threaded rods can be used and a change of the local bond mechanism can be appreciated experimentally. In ribbed bars the resistance is prevalently due to shear behavior of concrete between the ribs whereas for threaded rods friction prevails (see also anchorage in reinforced concrete). Bonded anchors are also referred as adhesive anchors[10] or chemical anchors. The anchoring material is an adhesive (also called mortar) usually consisting of epoxy, polyester, or vinylester resins. The performance of this anchor’s types in terms of ‘load-bearing capacity’, especially under tension loads, is strictly related to the cleaning condition of the hole. Experimental results showed that the reduction of the capacity is up to 60%. The same applies also for moisture condition of concrete, for wet concrete the reduction is of 20% using polyester resin. Other issues are represented by high temperature behavior and creep response.

A large inventory of Enerpac, Power Team, Simplex, Freyssi Flat Jacks, Skidmore and Calibore equipment enables W.B. to answer any need rapidly and effectively. To discuss the best system for your bridge lowering, raising, or moving, call W. B. Equipment at 866-522-5464 or email stephen.cireco@verizon.net or dcireco@hotmail.com.

For more information about WB Equipment sales, rentals and service consult our website at https://www.wbequipment.com 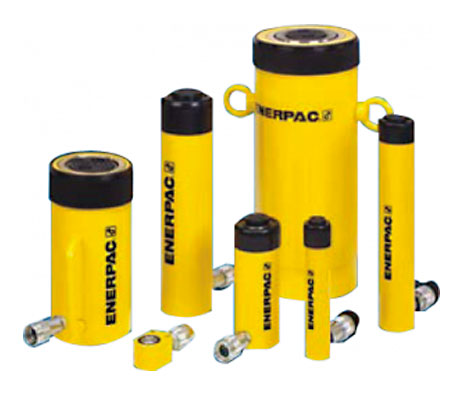 Custom hydraulic cylinders and hydraulic jacks made to order. Huge inventory readily available. With loads from 1 – 2,000 tons and pressure rating of 100 – I0,000 psi we can make any hydraulic cylinder or hydraulic jack to your exact requirements. Whether it be single acting, double acting, lockout or centerhole let us provide you with the right jacking system to perform your task. 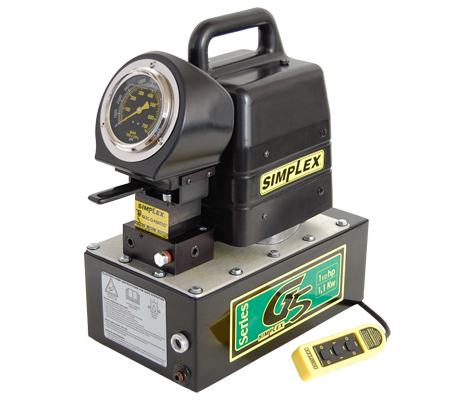 Custom power units and hydraulic pumps made to order. Electric, Gas, Diesel or Air Operated power units. Flow rates range from 1 GPM to 100 GPM. Our hydraulic pumps are available in over 1000 different configurations. They have a pressure rating of 10,000 psi. 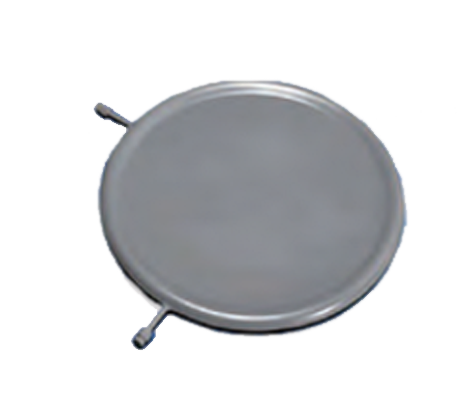 Freyssi Flat Jacks are simple, practical devices for the civil or structural engineer wherever the application or control of large forces is required. Flat jacks are frequently used in the solution of unforeseen problems such as in remedial measures or structural additions. 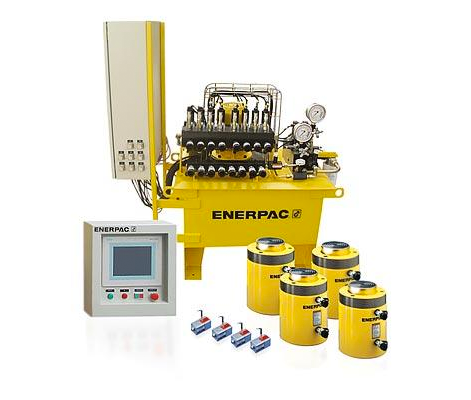 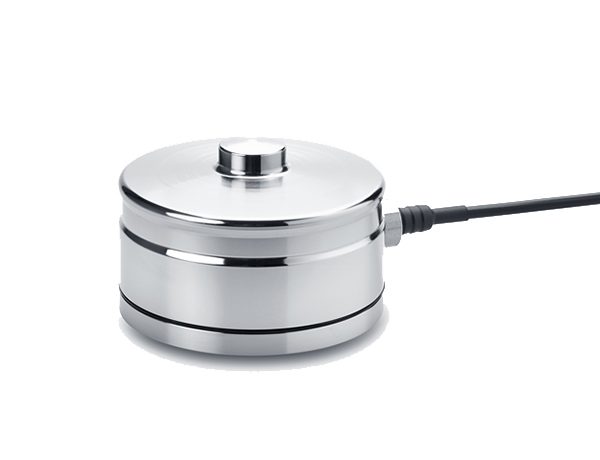 The Model 3000 Load Cell is made from an annulus of high-strength steel or aluminum, with electrical resistance strain gages in a Wheatstone Bridge configuration. The load cell is designed primarily for use on tiebacks and rockbolts, although they may be used during pile load tests and for monitoring loads in crosslot struts and tunnel supports, etc. In most cases, the load cells are used in conjunction with a hydraulic jack and bearing plates. 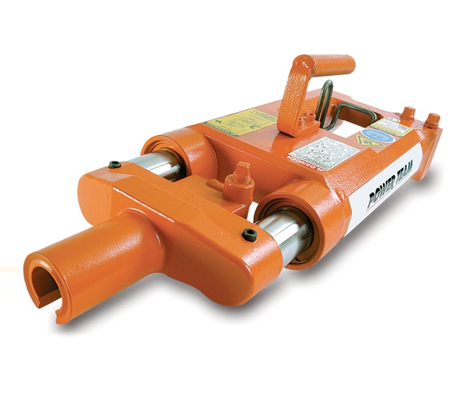 Power Team Monostrand Stressing Jacks are the most durable in the industry.

Monostrand Stressing Jacks suited for work on slab-on-grade where dirt, heat and high volume use take their toll.

Stressing jacks are mainly used on construction sites for stressing mono-strand anchors, and for the separate stressing of the strands of multistrand tendons. 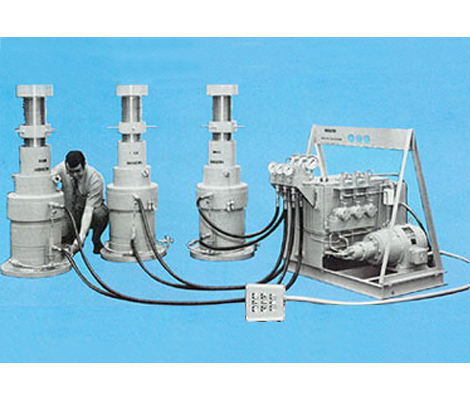 We can provide customized jacking equipment to test driven piles from 1 -2000 tons. The systems can be manually, electrically or automatically controlled.

WB Equipment has delivered components for multiple jacking systems. Our knowledge of structural design, hydraulics, and automation means that we are capable of designing a complete jacking system with controls that allow for fully automated jacking and monitoring. 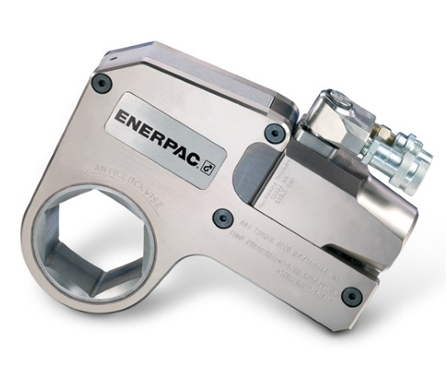 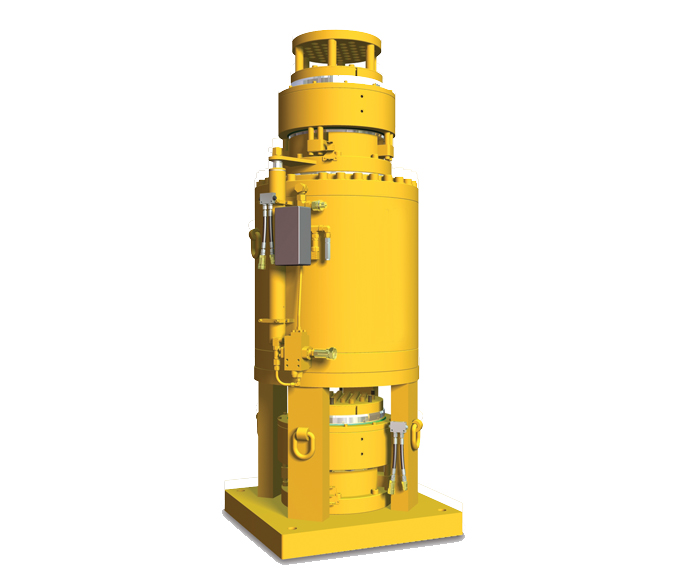 A strand jack (also known as strandjack) is a jack used to lift very heavy (e.g. thousands tons or more with multiple jacks) loads for construction and engineering purposes.

Strand jacks can be used horizontally for pulling objects and structures, and are widely used in the oil and gas industry for skidded loadouts. Oil rigs of 38000 tons have been moved in this way from the place of construction on to a barge. Since multiple jacks can be operated simultaneously by hydraulic controllers, they can be used in tandem to lift very large loads of thousands of tons. Even the tandem use of two cranes is very difficult operation. 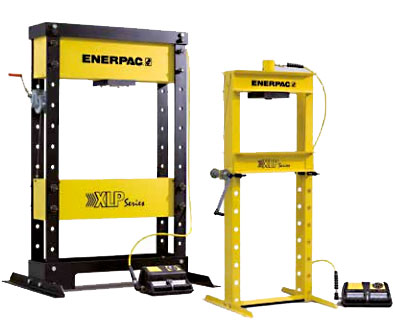 The hydraulic press depends on Pascal’s principle: the pressure throughout a closed system is constant. One part of the system is a piston acting as a pump, with a modest mechanical force acting on a small cross-sectional area; the other part is a piston with a larger area which generates a correspondingly large mechanical force. Only small-diameter tubing (which more easily resists pressure) is needed if the pump is separated from the press cylinder. 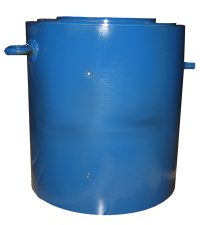 Custom made cylinders made to your specifications. All cylinders calibrated and traceable back to NIST. Centerhole,  locknut,  low height, single acting,  double acting,  long stroke. 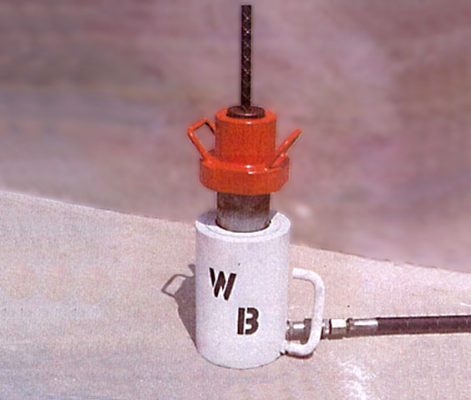 Quick acting re-bar grips are available for pull out testing of reinforcing bars in concrete, (re-bar/reinforcement bars) used in construction of highways, bridges, and tunnels as well as rigging and other applications.

When used with hydraulic jack, user slips jack and grip over grouted re-bar and applies pressure to load. These re-bar grips come in sizes No. 4-18 and accommodate construction industry’s focus on repair, maintenance, and building of public infrastructure.

A jack, screwjack or jackscrew is a mechanical device used as a lifting device to lift heavy loads or to apply great forces. A mechanical jack employs a screw thread for lifting heavy equipment. 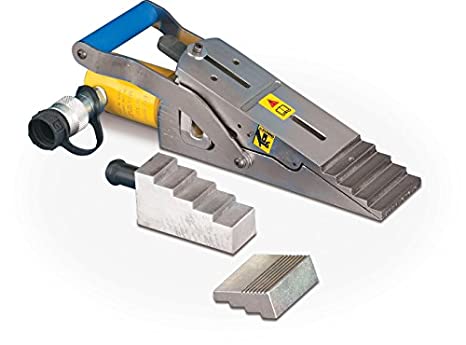 Unique interlocking wedge design: no first step bending and risk of slipping out of joint

Custom hydraulic systems designed to raise or lower any type of structure.
Give our engineers a call to discuss your applications.
Click here for More information

IMMEDIATE PICK UP AND DELIVERY!

We will arrange for immediate delivery of Anchor Bolt Testing equipment to your construction site anywhere in the world and pick it up when you have finished using it.